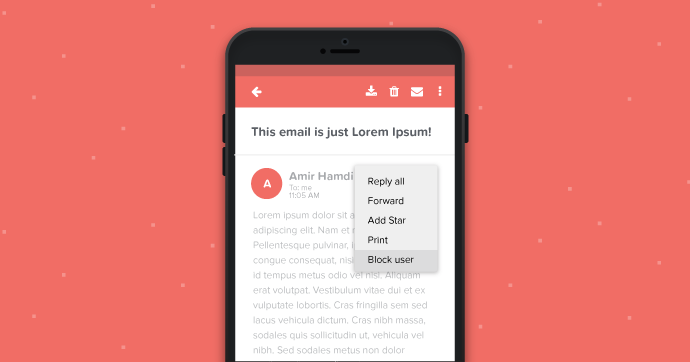 Gmail rolled out new “block” functionality to all Gmail webmail users in 2015, giving consumers yet another option to rid their inboxes of email they don’t want. On the surface, that might not sound like a great thing for marketers, but it’s not as bad as it sounds. It means you need to be smarter about image blocking in Gmail.

Many Shades of ‘I Don’t Want This’

Gmail’s world view on email has been consistently about not losing sight of the trees for the forest. Commercial emails are not the same as personal emails—and more than that, there are different kinds of commercial emails, including social notifications, promotions, and so on. There are many shades of email.

Similarly, Gmail recognizes that there are many shades of “I don’t want this email.” With the latest addition, Gmail users can now—in increasing order of severity—decide to…

Gmail said that Android users on the Gmail app will have the ability to block next week, and that the option to unsubscribe will also be added soon, so functionality in the app will match that of the webmail client.

In giving users another way to stop receiving emails they don’t want, Gmail appears to be trying to fine-tune its local blocking of senders. The problem largely stems from the fact that the “report spam” button is used liberally by email users. While it is used to vanquish malicious and unsolicited messages, it’s also used much more casually as a convenient, never-fail unsubscribe button.

Since spam complaints are a major factor in ISPs’ decisions to either globally block all of a sender’s emails or locally block just the ones being sent to particular users, this ambiguity muddies the waters. For instance, at least one ISP has said publicly that they don’t count spam complaints against senders when the subscriber was previously engaged with the emails.

The option to “block” appears to be an attempt to give users a new, more accurate way to express their displeasure with a brand, one that doesn’t rely on the brand to honor an opt-out but doesn’t tarnish the brand’s sender reputation.

Better Than the Alternative

For marketers, the upside is that the new “block” option should reduce spam complaints because some subscribers who would have previously clicked “report spam” will now click “block” instead. The downside is that the “block” button may have created a new lower bar for ISP intervention, so some subscribers who might have previously clicked “unsubscribe” will now click “block” instead.

There are 4 ways to minimize the downside of this new development:

1. Make your unsubscribe link prominent in your emails. If subscribers can’t easily find your opt-out link, some will simply block or complain to save themselves time. So if your unsubscribe link is buried in a bunch of small grey type, it’s time to break it out on a line by itself with larger, easier-to-read type, perhaps with a brightly colored link. Consider including both an HTML text opt-out link as well as a graphical or bulletproof opt-out button.

Also consider an additional unsubscribe link at the top of your emails in situations where blocks and complaints are more likely. Emails sent to inactive subscribers are good candidates for this treatment, as are welcome emails since new subscribers may suddenly regret signing up or may not have realized they were subscribing.

2. Surface your preference center more often, if you have one. Often times, a subscriber would be happy to continue receiving emails if only they could receive messages less often or on different topics. Many opt-out processes are now managed in preference centers, but as more subscribers rely on ISP-provided opt-out methods, marketers can’t use their preference centers as a last resort anymore.

Be proactive with your preference centers. Key moments in the subscriber lifecycle to target include the onboarding process and as a response to inactivity.

3. Make use of Gmail’s auto-unsubscribe feature. Add the “list-unsubscribe” header and Gmail will, in certain circumstances, place an “Unsubscribe” link after your sender name and sender email address (as seen in the Pinterest email example above). While this link allows subscribers to circumvent your opt-out process—including preference center, if you use one—it’s still preferable to getting a block or spam complaint.

4. Send more relevant messages. The arrival of the “block” button should be yet another reminder that marketers need to send more messages that are contextually aware, making use of segmentation, personalization, dynamic content, triggered messaging, and other tools and techniques to create better subscriber experiences.

Doing those 4 things should help blunt the negative effects of the new “block” option, but in general I’m expecting this to have positive benefits for marketers since Gmail users now have a less punitive way to stop getting messages from senders. It remains to be seen if Gmail will share block data via its feedback loop, but it’s recommended that marketers keep an eye on the spam rate that Gmail reports over the coming weeks and months as consumers become acquainted with this new option.