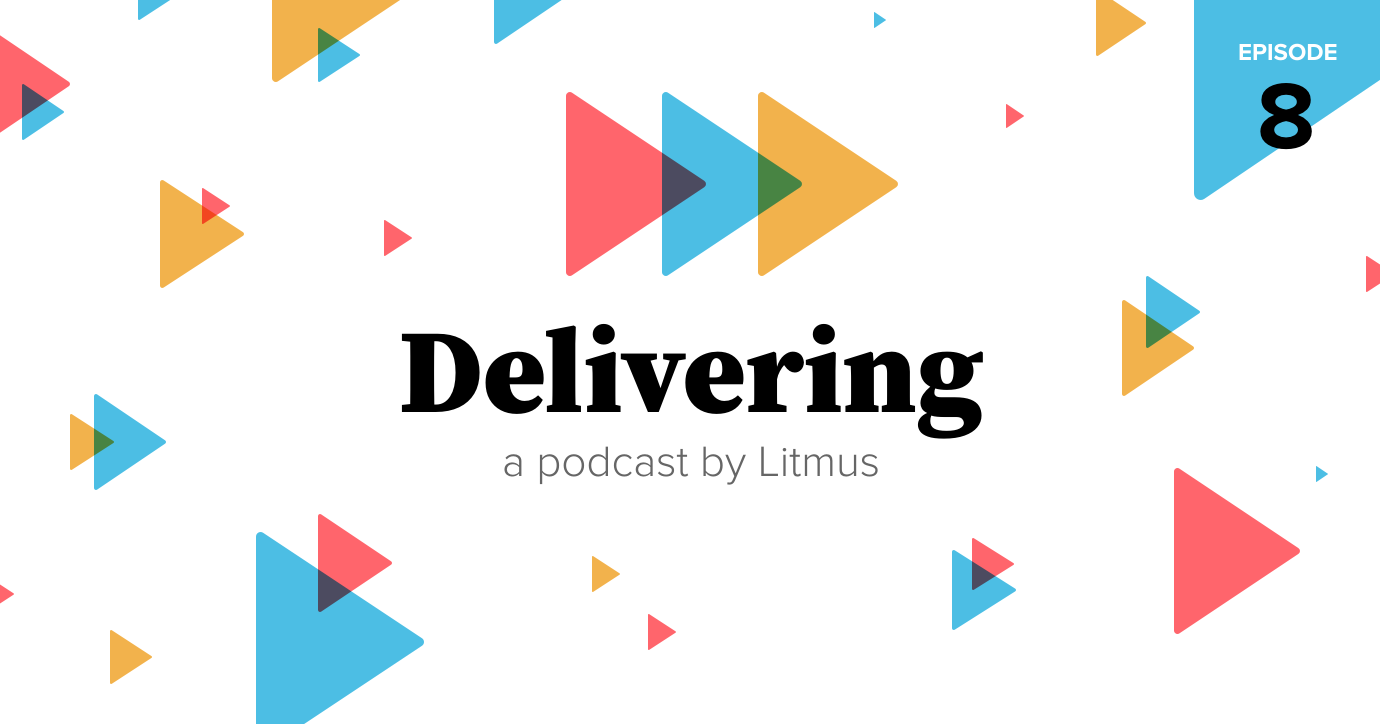 In this episode of Delivering, host Jason Rodriguez tests out the current state of voice assistants and email marketing. Do email marketers really need to worry about Alexa and friends?

Be sure to subscribe to Delivering on iTunes or Spotify to listen to future episodes and join the conversation on Twitter using the hashtag #DeliveringPodcast.

Hey Alexa, do I have any unread emails?

Welcome to Delivering, a podcast about email marketing strategy, design, development, and the broader email industry. Delivering is brought to you by Litmus, the creative solution used by over 600,000 email professionals to design, test, analyze, and collaborate on better email campaigns for happier subscribers. Learn more and try Litmus free for seven days at litmus.com.

This year, Siri turns eight. Microsoft’s Cortana and Amazon’s Alexa are both five. And, while Google Assistant is still a toddler at three years old, voice assistants are becoming more mature and gaining in popularity. Brands around the world are investing in voice-enabled apps to literally “talk” to consumers. And it looks like consumers are largely buying into voice-enabled technology, despite a slew of privacy concerns and very public, embarrassing problems with early voice technology.

But what does something as new as voice assistants mean to one of the oldest digital technologies around: email? That’s the question I set out to answer in this episode of Delivering, by setting up—or at least trying to set up—and use some of the most popular voice assistants on the market today.

Until recently, my only exposure to voice assistants has been setting reminders to check my quinoa on the stove or adding an alarm to make sure I don’t miss an important meeting. That was largely done through Siri and, more recently, Google Assistant when I switched to the Pixel 3. I’ve never used voice assistants to check email, which is probably a result of me being an email designer for so long. Call me old-fashioned, but I love looking at campaigns in my inbox, taking all the good and bad that comes with rendering HTML and CSS on screen.

However, with voice assistants being used by a quarter of Americans on a regular basis, I knew it was time to see what voice-enabled devices like the Google Home and Amazon Echo were capable of when it comes to reading email.

So, for my testing, I got a hold of a few devices and set them up, with varying levels of success. Along with Siri on an iPad, I tried using Cortana on Windows 10, Alexa on an Amazon Echo Dot, and Google Assistant on a Google Home Mini.

Setting up Alexa was extremely easy. All it involved was opening up the Alexa app, going into the settings, and linking my Gmail account. After that, all I had to say was, “Alexa, what emails do I have?”

I was surprised when I tried the same on my Google Home Mini.

Troubleshooting things took quite a while. After wasting about an hour doing research, trying out a multitude of Gmail accounts – both consumer and G Suite – and digging round Google’s own help site, it looks like email isn’t currently supported by Google Assistant, both on mobile devices and voice-only devices like the Google Home. This comes as a huge surprise, since Gmail is so vital to Google and the most popular email service on the planet.

While Google did announce G Suite Calendar integration with Assistant this year, it seems like a massive shortcoming of what is otherwise a premier voice assistant service. We’ll see if and when Gmail and other service skills come to Google Assistant.

Microsoft’s Cortana had similar issues. It took me a while to figure out how to sync my Gmail account but, even after it was added to Cortana and the email skill was enabled, I couldn’t get Cortana to read any emails from Gmail.

Cortana claims that there are no emails to read.

Apple’s Siri is better, if not as effective as Alexa. It took adding a new Siri Shortcut to get things working, but once added, checking email was as simple as saying, “Hey Siri, what emails do I have?”

While Siri does a good job reading out the senders and subject lines, it won’t currently read through an entire email. Instead, it will pop open the Mail app and let you read an email yourself. For those with visual impairments or who want to go completely hands-free, you’ll need to enable additional accessibility features to get Siri to read your emails out loud.

For the sake of brevity, let’s focus on Amazon’s voice assistant, which is easily the most capable voice assistant when it comes to reading email. Shall we have another listen?

In testing, Amazon’s voice assistant seems to just read through the HTML text in the email, ignoring images entirely. This is bad news for folks sending largely image-based emails, since there won’t really be anything to read out loud.

When it comes to plain text emails, it’s all text, so the email is read out in its entirety.

At the end of last year, Kevin Mandeville did an excellent breakdown of what works and what doesn’t in voice-assisted emails, noting that things like HTML attributes—especially ARIA roles—aren’t supported like in traditional screen reader tools. This is unfortunate, but kind of makes sense. Those attributes are usually meant for people with disabilities like visual impairments, who would be using assistive technology like screen readers anyways. It’s unlikely that they’d be doubling up on devices and need that additional information via something like Amazon’s voice assistant.

I’m curious to see if this gets updated anytime soon but, for now, I think it makes sense.

All of this begs the question: What should email marketers be doing to create better voice-enabled experiences for subscribers?

To me, it’s obvious, and something I’ve been advocating for years. Email marketers need to use live text in their campaigns instead of just dumping a bunch of images sliced up in Photoshop. Ideally, that text will be marked up using semantic HTML, which will aid people using other types of assistive technology.

Additionally, marketers should revisit their copywriting in the context of being read out loud. Overly verbose, jargon-filled emails sound unnatural and will likely lead subscribers to hop to the next email.

Copywriters should try to use simple, clear language that sounds like some speaking directly to them. One of the best ways to get there, in my experience, is to read copy out loud—not just in your head—when you’re drafting it. Record yourself if needed. But hearing what an email sounds like out loud will help inform your decisions and create better emails for subscribers, in the inbox and on voice-enabled devices.

Listening to the Siri example, we should probably pay more attention to subject lines, too. Siri will read the sender name and then say, “About” before reading the subject line. This can sound awkward sometimes, so the same rule applies. Try reading your subject line out loud the same way Siri would when writing it.

Finally, we all need to be thoughtful when setting up our sender names. Using a name that subscribers are familiar with is paramount. It may be tempting to use something funny or an individual’s name, but unless you’re Clark from InVision, this could lead to confusion for subscribers and result in emails being skipped.

Should email marketers even care about voice assistants?

According to a recent study from VoiceBot.ai, nearly 89% of marketers surveyed said that voice assistants are important as a marketing channel, with almost 63% saying that they are significantly or extremely important.

A report from Juniper claims that there are currently 3.25 billion voice assistants in use today. While a lot of those are on smartphones, VoiceBot.ai also reported that 1 in 4 American adults have access to a smart speaker, which is huge. 61% of those are using Amazon devices, which bodes well for email marketers. 24% of them are using Google Home devices, which will be awesome, assuming that Google ever updates Assistant to work with Gmail.

The numbers clearly point to voice assistants being an increasingly important communication and marketing channel. As more users get familiar with voice assistants—and voice assistants themselves become more capable—I think we’ll see interesting new ways to put email to work in the context of audio.

Still, I think there are significant challenges before that happens. In my experience, setting up and using most voice assistants is a pain. And I’m a very technically capable person who delights in playing around with new devices and technology. I’m very pessimistic about the everyday consumer slogging through setting up a bunch of devices just to use their email. Instead, I think voice assistants will largely be used to get quick updates on weather and events, see what else Hopper was in besides Stranger Things, and ask Spotify to play the latest from Lizzo.

Still, using email with voice assistants makes it clear that now, more than ever, email marketers need to focus on the basics like copywriting and accessibility.

Like this episode of Delivering? Give us a review on iTunes and share the podcast with your friends. And be sure to join the conversation using the hashtag #DeliveringPodcast on your favorite social network.

Delivering is brought to you by Litmus.

Litmus is the only platform that helps you send email with confidence, every time. Over 600,000 marketing professionals use Litmus’ tools to build, test, and analyze better email campaigns faster.

Head over to litmus.com to start your free 7-day trial of Litmus and start sending better emails today.